10 Reasons NOT to Live in Asheville

If you’re thinking about moving to Asheville, North Carolina, there’s more to consider than just the great food, beautiful hiking, and temperate weather. Asheville is great, but there’s a few not-so-great things about living in Asheville. If you can’t handle crowds, potholes, and really expensive housing, it might not be the place for you. Check out these 10 reasons NOT to live in Asheville, NC.

Reasons NOT to Live in Asheville

Asheville is centrally located, full of fun shops and restaurants, and hosts an array of festivals, music, and outdoor recreation. It comes as no surprise, then, that everyone wants to be in Asheville; even those who don’t live there. Over 9 million people visit Asheville annually; that’s a lot of tourists.

If you live in Asheville you’ll have to deal with these sometimes-unwelcome guests, especially during peak seasons. The fall, winter, and summer are high-concentration tourist seasons, but any time a band or festival is in town, or even just on regular weekends, you’ll notice more people all over town. With all of these tourists, it’s harder to get seated at a restaurant, find a parking spot, or even go to the grocery store. Don’t get me wrong, Asheville is a phenomenal place to explore, but as a local it can feel like you don’t have your space when there’s an influx of visitors. 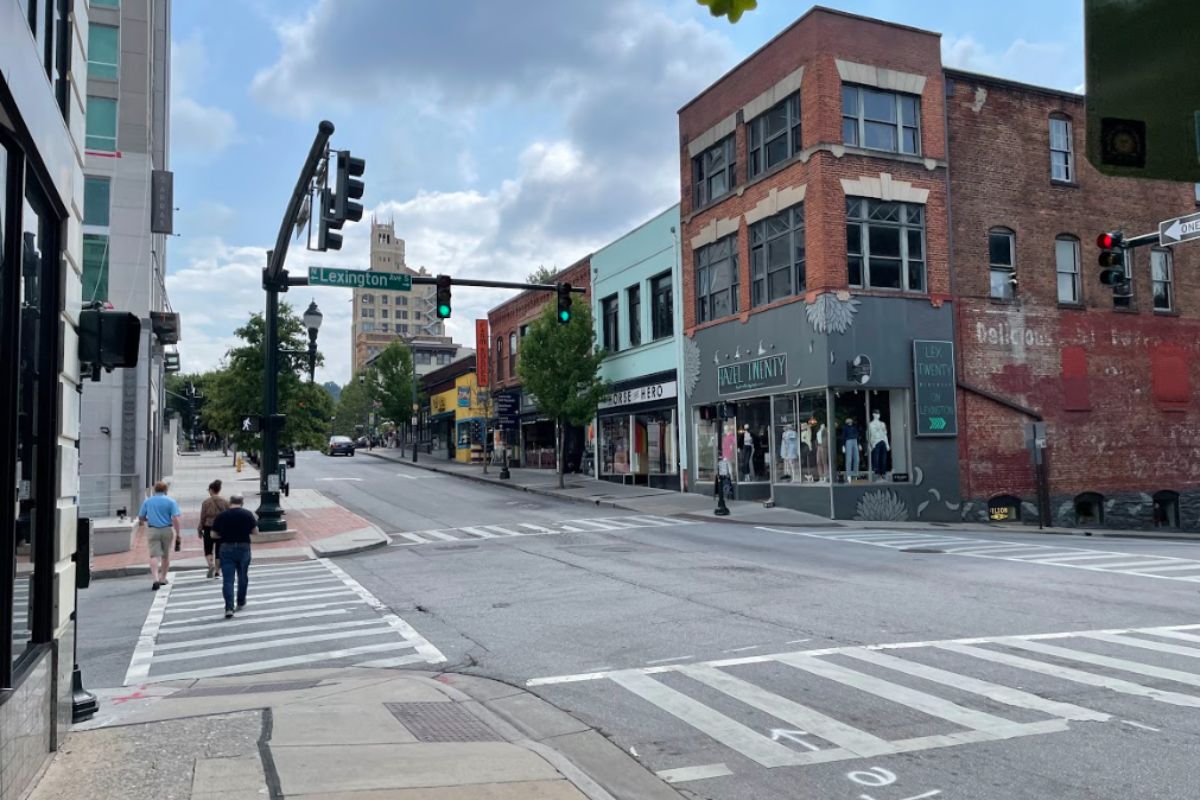 Asheville loves its beer, and not just any brew will do. Craft beer is king in this mountain town. If you don’t like craft beer, you’re going to have to listen to why it’s so great anyway. If you can’t get down with a good hazy, or IPA, or sour you’ll be hard pressed to find something you like. And yes, you can ask for a domestic on draft, and yes, you will be judged. Even if you do just prefer light beers (and you know, want a drink that doesn’t cost $14.00 each) you will struggle to even find places that serve them. 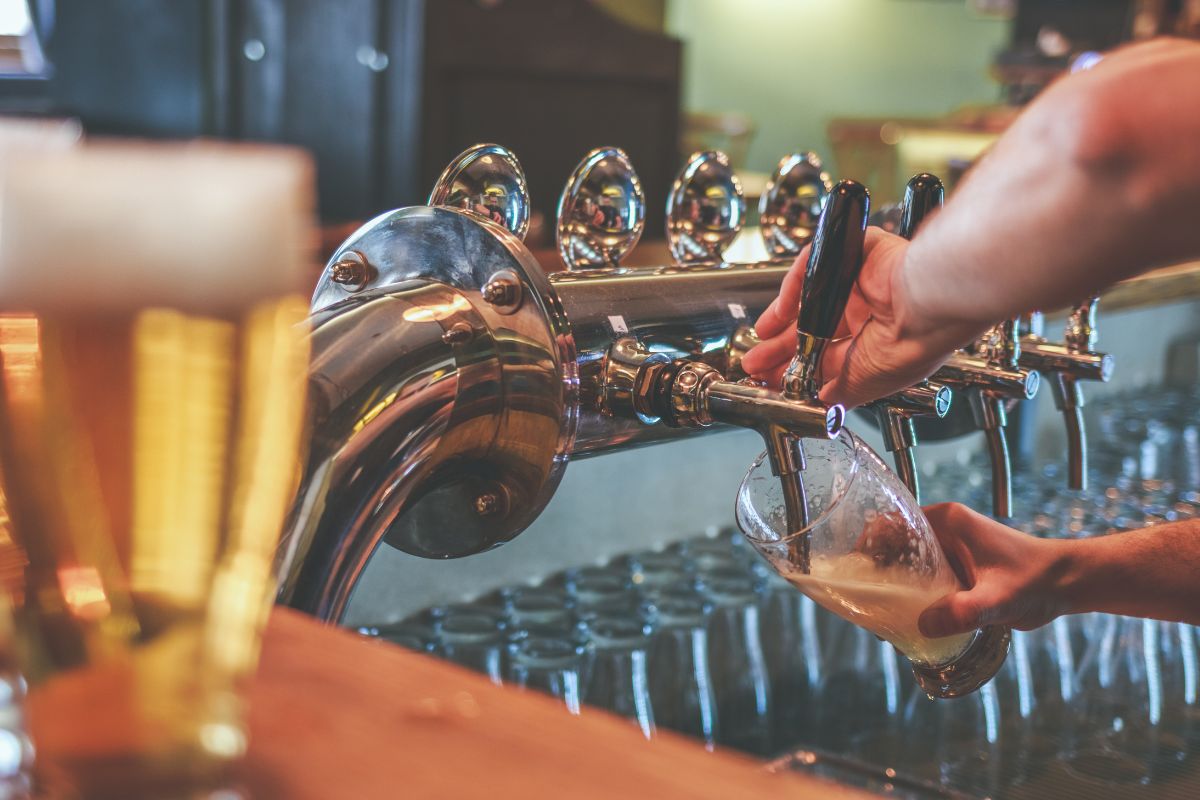 We mentioned all those tourists who flock to Asheville like Times Square on New Year’s Eve, well, they all come in cars! It’s bad enough that Asheville experiences an influx of vehicles throughout the year, but the infrastructure around town just isn’t equipped for it.

TheI40 and I26 both pass through Asheville, bringing with them traffic from all over the country. The roads in Asheville need more lanes to accommodate more cars. Stop lights need to be converted into roundabouts. Potholes litter the streets and it’s not uncommon to find damage to your car due to the poorly maintained roads in Asheville. Though some work is being done on the streets of Asheville, it’s just not enough to make a big difference.

Asheville is not immune to the struggle of big city crime. Unfortunately, though this little mountain town is quaint and friendly most of the time, it has a shockingly high crime rate. Asheville’s crime rate is 179% higher than the national average. With a rising unemployment rate in Asheville, the crime has only gotten worse. As the crime rate has increased in recent years, many residents feel like even the safest of neighborhoods are not a place where you can leave personal property in the yard overnight.

Most of the crime in Asheville is non-violent crime such as theft and vandalism. It's less common to see crime in which people are actually harmed. Still, nobody really wants crime of any kind literally in their backyard, right? 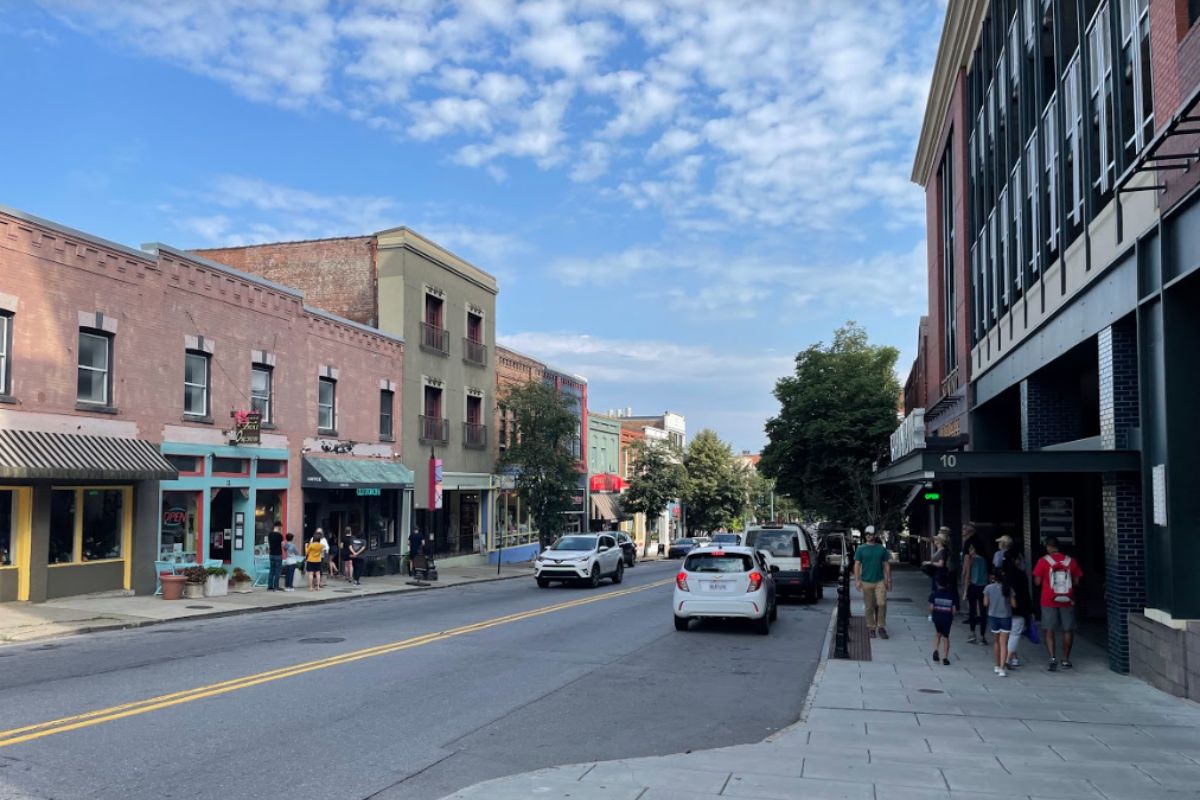 Learn More: Is Asheville dangerous to live in?

5. Asheville is not very walkable:

Asheville is a small city, and though it’s urban, it isn’t “big city urban.” One of the biggest complaints for Asheville locals and tourists alike is how hard it is to get around town if you don’t have your own vehicle. Most consider good public transportation to be a staple of city life, but that isn’t the case in Asheville. The buses don’t get you to many places around town, the bike lanes and sidewalks can be hit or miss, and the walkability of Asheville is almost nonexistent. Parts of town are more walkable than others, such as downtown, but unless you live very close or in downtown (which is exceedingly expensive) you won’t likely be able to walk to the grocery or coffee shop. 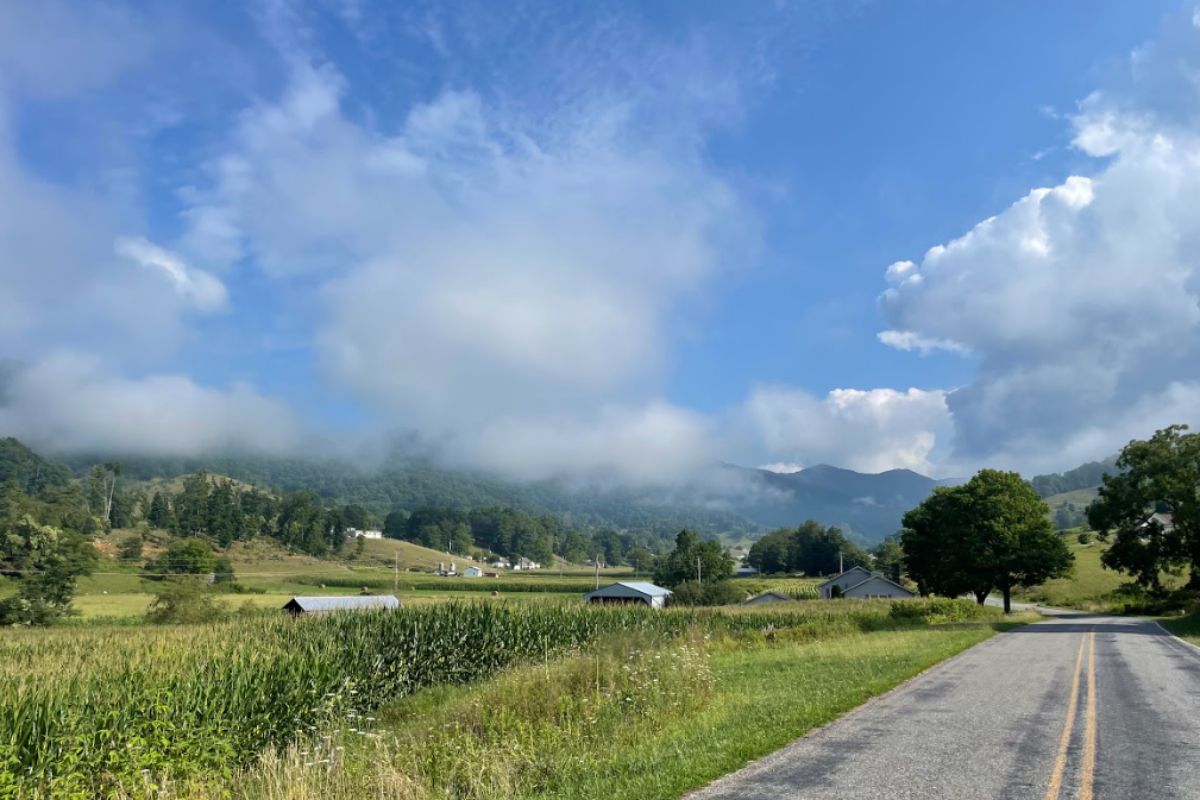 One of the hard and true facts of Asheville is that there are just not enough jobs for everyone who wants to call Asheville home. It is notoriously difficult to find employment in Asheville, so if you are moving without a job already lined up, know it’s going to be even harder to get one once you’re already there.

The median income in Asheville is only $29,000 a year, about 19% lower than the national average. So, these jobs are hard to get and low paying…great!  If you have remote work this might not be an issue, but if you think there will ever be a reason you might not have that particular job in the future and would need to find a new one, it’s something to consider. If you happen to have remote work somewhere else in the country with a higher median salary, you can actually benefit from making a higher wage than you would if you had found employment in town.

So, we already know it’s hard to get a job in Asheville, and that those jobs don’t pay very well. Housing in Asheville is extremely expensive. The median home price is $390,000 dollars, which is pretty difficult to swing if the median income is $29,000. As high as the housing prices are in Asheville, don’t expect to do much negotiating when it comes to trying to buy a home here. It’s a sellers’ market in Asheville and that isn’t likely to change. When a home goes on the market it usually sells within days. Homes are expensive, sell quickly, and buyers often have to forgo basic home buyers’ rights like an inspection, because while you are busy asking for the inspection, someone else is throwing down an asking price with zero conditions or caveats. 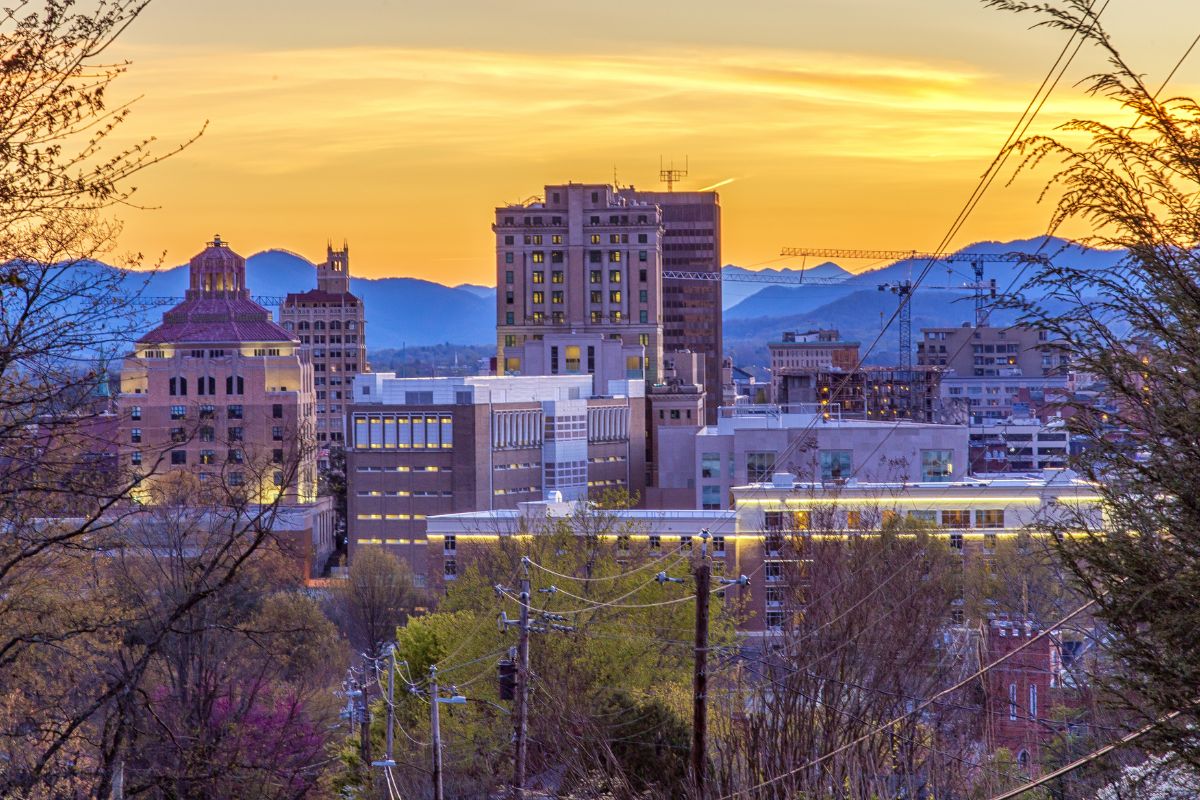 Learn More: What is the cost of living in Asheville, North Carolina?

As mentioned earlier, the population of Asheville has grown over the last decade, and as it grew, all facets of the population increased including the homeless population. This isn’t uncommon in areas that are expensive and experience a great deal of tourist traffic. These places present an environment for people to be spending a lot of money and then throwing away said food and other possessions with little care, especially if they are just there on vacation.

More so in the downtown area of Asheville, it’s difficult to go out to eat or to a festival without coming across homeless people and their living encampments. This is a difficult hardship to tackle as a city; these are real people with real needs. But a large homeless population tends to increase crime, and the mental stability of those who find themselves unhoused can be difficult to predict. Now of course this is an issue in every major city across the nation (and the globe), but it’s one to be pointed out here that Asheville isn’t a unique utopia - although it’s beautiful enough to be.

As if summoned by the craft beer that flows through the city like blood through a vein, the hipsters are out in droves in Asheville. If you get annoyed by man-buns, beards, avocado toast, LP vinyl collections, beanies, and women who look like they procured their wardrobe from their grandfather’s closet, you might find the residents of Asheville will get under your skin. Asheville is a very liberal, artistic, diverse city. With that comes cuisine of all kinds, music from all over the world, and a generally socially liberal atmosphere. While this makes it a great place for those who want to be around other like-minded individuals who support local art and small businesses, it can definitely be a thing not everyone is looking for. 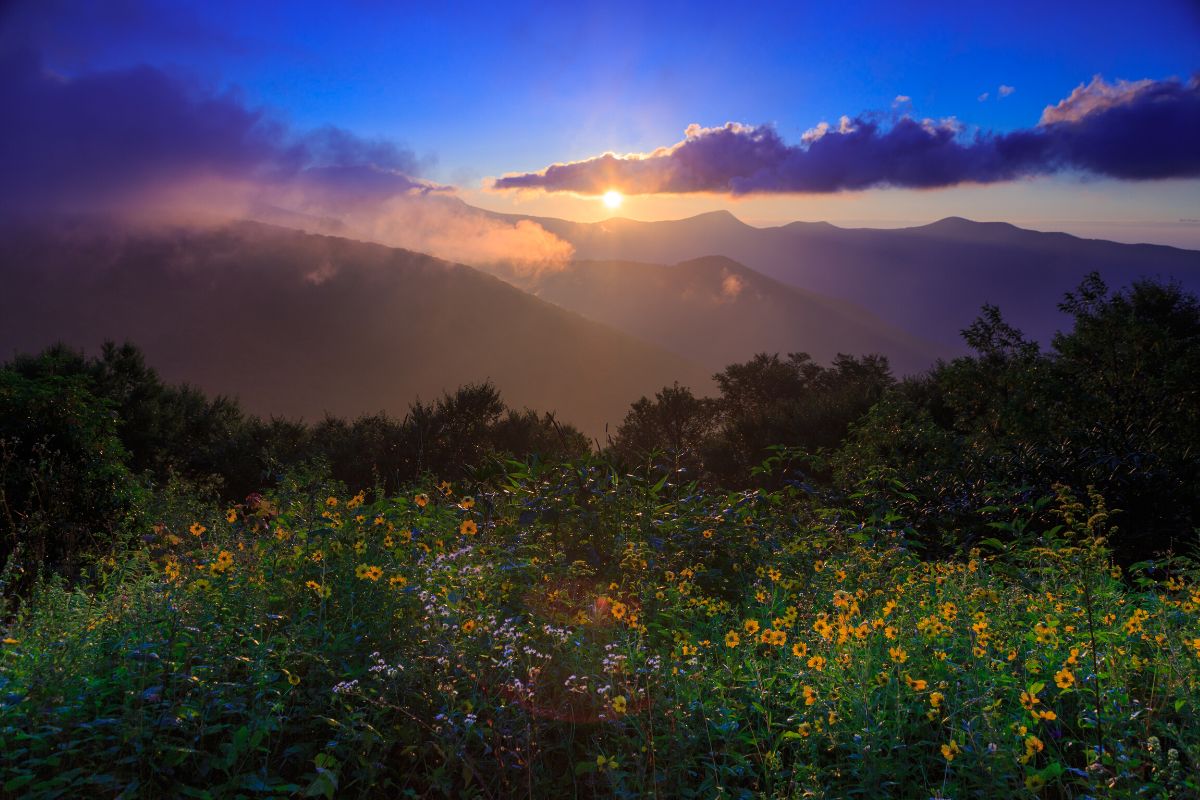 Learn More: Where to live in & around Asheville

Asheville does have a downtown area, and it is referred to as Downtown Asheville. But it isn’t the kind of downtown you might picture. When you think of Downtown Anywhere, you imagine a main street, or a city square, maybe a courthouse or central gathering area. Asheville doesn’t really have this.

There are a lot of great little places to shop and eat and drink in Downtown Asheville, but it’s not necessarily an area where it’s easy to park your car and then walk everywhere you need to go. Again, the walkability of Asheville is somewhat lacking, and downtown is just as not walkable as the rest of town. If you have a place in mind for dinner or drinks, that’s great, but don’t expect to do too much bar hopping all over town.

Regardless of the bad, still want to call Asheville home?

Nowhere you live is going to be totally perfect, there are pros and cons to living in any city! If you love all that Asheville has to offer and are ready to make your move to the Blue Ridge Mountains, reach out to me at Nesting Doll Realty. I would love to help you find your perfect home in Asheville, NC!

Pros and Cons of Tiny Homes in Asheville North Carolina

Are you thinking of living in a tiny home in Asheville, North Carolina? The tiny home movement has swept the nation, and as these petite dwellings pop up throughout the most beautiful places

Living in Asheville vs Charlotte

Are you considering moving to Asheville, NC? Or, perhaps you think Charlotte, NC, sounds like it might be a good fit for you? Before you pack up the U-Haul, take a look at two of North Carolina;

10 Reasons NOT to Live in Asheville

If you’re thinking about moving to Asheville, North Carolina, there’s more to consider than just the great food, beautiful hiking, and temperate weather. Asheville is great, but there

Top things to do in Asheville NC

What are the best things to do in Asheville, North Carolina? Perhaps you are visiting for an entire week, or only have a few days to cram in as much fun and adventure as possible. No matter how much

By registering, you agree to our terms of use and that real estate professionals from Nesting Dolls Realty and lenders may call/text you about your inquiry, which may involve use of automated means and prerecorded/artificial voices. Message frequency varies. Text HELP for help or STOP to cancel. You don't need to consent as a condition of buying any property, goods or services. Messages/data rates may apply. Additional information about data use is in our privacy policy.